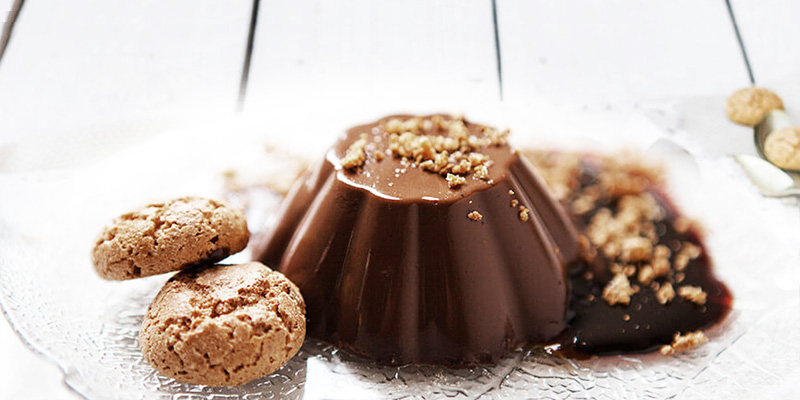 The bunet (or bonet, using the traditional spelling) is a typical ancient dessert of Piedmont, specially in Torino (Turin). It is a dark pudding, of the same family of the crème caramel desserts, and it was already diffused in the 13th century’s court banquets.

Its name means hat or a toque.
According to the official interpretation, this name refers to the shape of the copper mould used to cook it. Others believe that the dessert was called bunet because it was served at the end of the meal, the same way as hats are the last garment to wear before going out.

Bunet’s main ingredients are eggs, sugar, milk, liqueur (usually rum) and amaretto biscuits. Its dark colour is given by cocoa, which was added to the recipe only in the 15th century following the discovery of America and the later diffusion of this ingredient in Europe. The original recipe, today less common, is the white bunet.

There are many variations to the original recipe. For example, some use ingredients such as hazelnuts, which are typical of the area, or coffee or cognac instead of rum.

This website uses cookies to improve your experience while you navigate through the website. Out of these, the cookies that are categorized as necessary are stored on your browser as they are essential for the working of basic functionalities of the website. We also use third-party cookies that help us analyze and understand how you use this website. These cookies will be stored in your browser only with your consent. You also have the option to opt-out of these cookies. But opting out of some of these cookies may affect your browsing experience.
Necessary Always Enabled

Any cookies that may not be particularly necessary for the website to function and is used specifically to collect user personal data via analytics, ads, other embedded contents are termed as non-necessary cookies. It is mandatory to procure user consent prior to running these cookies on your website.